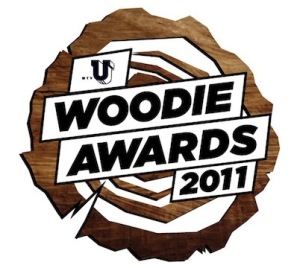 And who says there is nothing on at 4 am on Tuesday morning?
The cable channel Palladium aired the 2011 MTV’s Woodie Awards at the SXSW music festival in Austin, Texas this past March. Overall it was a great line up with the show being hosted by Donald Glover and commercial break music provided by current knob turner da jour Skrillex.

Great Performances were done by Foo Fighters, Wiz Khalifa, Two Door Cinema Club, Sleigh Bells, and Odd Future. The best performance was delivered by Sleigh Bells, who brought a marching band drum corps on stage for the end of “Riot Rhythm”.
Over all, great show. Too bad MTV is relevant only once a year.