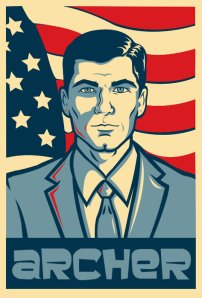 Today on “Attack of the Cable Box”, we look at the latest episode of our favorite emotionally dysfunctional spy, Archer.  This episode is entitled “El Contador” (season 3 episode 5)

Archer and Lana are sent out bounty hunting for a South American drug lord, but instead of sending Ray (who was paralyzed during the “Heart of Archness” 3 part story), Malory, Archer’s mother, promotes Cyril to agent and sends him along.  There are several problems about this:

So, as they head of into the jungle, Malory announces drug tests for everyone, which sends Ray, Pam, and Cheryl into a tizzy.  But Kreiger has the solution – some experimental “tea” he mixed up and charges them $100 each for the concoction.  All three end up in the bathroom in the worst acid trip ever, which Kreiger deems his experiment is “exceeding all expectations”.  Pam escapes from the bathroom and Kreiger goes after her with a tranquillizer dart gun.

Meanwhile, Lana and Archer lose Cyril, who happens upon the drug lord and convinces him he is an accountant from the drug lord’s boss (it fits because Cyril was the only one that read the case file).  The drug lord decides to hunt Archer and Lana through the jungle, but again Cyril saves the day and bails Archer and Lana out of trouble.  Show ends with Pam, naked, running across Malory’s office door with several darts in her back, Kreiger running by and say “ Lock all the exits!”, and Cheryl riding in Ray’s lap (in his wheelchair) up to Malory’s desk, naked, to plop down the urine samples. “Don’t ever ask us for this again” says Cheryl as they ride off.

It was nice to see Archer back in form – the loveable, selfish, narcissistic person he is, such as when he knocked down Lana to get a head start when being hunted.  This also had Kreiger and one of his crazy experiments, which I enjoy and adds another weird dimension to the show.  Overall a great episode and hopefully a good indicator of how the rest of the season will be.

(From Pam to Ray) “Hey Ironside, you rolling dirty?”