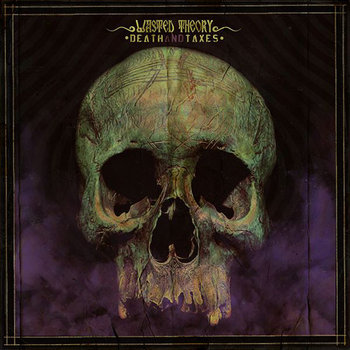 The guys in Death Theory takes the listener to a time where groups sat around in someone’s bedroom, hitting the bong with the incense burning (and the towel stuck under the door to keep the parents from smelling the smoke). and spaced to out to some the latest stoner rock album.  Their album, “Death and Taxes”, is bass heavy, simple in it’s structure, and conjures images of dark, smoky biker bars.

The vocals, especially on the track “Hellfire Ritual”, come off as a cross between Rob Zombie and Lemmy from Motorhead (in a very good way).  The drums are slow and steady which is perfect to keep the beat with the slow bobbing of the head, with the occasional break just to keep things interesting.  The guitars are just as gravelly and rough as the vocals and remind me of the great work Tommy Iommi did with Black Sabbath did during their heyday – especially on the track “Tire Iron”.

Despite the simple formula of this type of rock, execution is a true art.  Wasted Theory nails classic stoner rock with this record.

Check out Wasted Theory’s “Death and Taxes” at https://wastedtheory.bandcamp.com/